Introduction to Chakras and Chakra Meditation 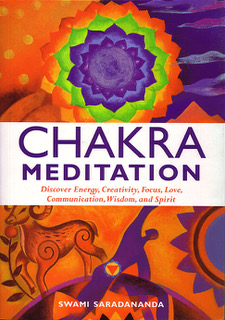 Your chakras represent the energetic intersection between physical matter and your consciousness. Each chakra is constantly receiving as well as transmitting energy. Each acts as a transformer of subtle energy; they are the gears that shift your energy up or down. How smoothly your chakras functions determine how fully you inhabit your body, how successful you are in your relationships with the outside world and how much inner peace you are able to enjoy.
Chakras are centres for condensing the energy of consciousness into more solid forms. In order to bring your ideas to fruition, you need to be able to shift your gears in a downward direction. Creation begins as pure consciousness and gains density with each step downward until it manifests fully in solid form on the physical plane. Think about what happens when you feel inspired; an idea comes into your mind. You think about it, perhaps speak about it with friends and colleagues. You give it your energy. The more you think and speak about your idea, the more you plan and organise it, the more dense the consciousness becomes until it successfully comes into being in physical form. Every building, each political movement and the styles you wear began as a thought in someone’s mind.
Conversely, upward moving energy is necessary in your journey towards enlightenment. Chakras transform energy into liberating current, beginning with the fixed solidity of earth and moving upward to more subtle forms. When looked at in their ascending order, the energy of each chakra is free-er, less gross and less restricted than the one below it. Chakras are necessary as “step-up” transformers in your journey towards consciousness. They awaken and liberate your consciousness; they enable you to reach the ultimate stage of freedom and enlightenment.
Chakras are often referred to as a lotus flower, each with a differing number of petals. In the Indian tradition, the lotus is a powerful symbol. It is born in and rooted in the mud and mire, the “earth” of the root or muladhara chakra. The flower grows in water, the element associated with the sacral or swadhisthana chakra, but the lotus is unaffected by its environment. Its only aspiration in life is to move towards the sun; in chakra terms the “light” of the sun is symbolic of the crown chakra.
Chakra Meditation can help you to restore and enhance the smooth flow of energy. They are designed to help you keep your life in balance – even in the face of the complications of daily life. With regular practice you may also find that they release the potential of the psycho-spiritual energy known as “kundalini”, that lies dormant within your lower chakras.
For many years I worked with a well-known yoga organization that conducted regular meditation sessions. As part of our curriculum of teaching people to meditate, we suggested that they pick one of the higher chakras as a focal point on which to concentrate the repetition of their mantra. If they deemed themselves to be more intellectual by nature, it would be a good idea to use the ajna chakra, the energy centre between the eyebrows that is commonly known as the “third eye”. If they were more emotional by nature, we suggested that they use the heart centre. Although the lower chakras were mentioned in classes that surveyed the subtle “anatomy” of the body, they were rarely used for meditation.
After a while, I began to notice how the sole use of the higher chakras for meditation tends to make people a bit too airy, spacey and “in their heads”. This led me to begin to explore meditations on the various chakras, particularly on the lower chakras for their grounding effects.
To begin practise the following introductory meditation. This will enable you to actually experience the energy centres that we call chakras, instead of thinking of them as philosophical concepts. Feel where your particular weaknesses lie. This can help you to begin to remove blockages and any other problems that you need to be working on.
Introductory Chakra Meditation
Sit in a comfortable meditation position with your back straight. Take 2-3 full, deep breaths. When you have finished, let your breath revert to a natural rhythm. Do not try to control it. Begin your meditation by bringing your attention to the base of your body, the region of your root chakra.
Gradually move your attention upward, visualizing each chakra as a flower that is opening. In Indian tradition, chakras are referred to as ‘lotuses’, but you may prefer to see them as any type of flower.
Muladhara: The Root Support at the base of the body
Meditation on the root chakra elaborates a grounded attitude towards life and steadiness of mind
Swadhishthana: Headquarters of Personal Creativity in the sacral region
Meditation on the sacral chakra develops your ability to “go with the flow”
Manipura: the Power Base in the solar plexus region
Meditation on the third chakra boosts digestion and charisma
Anahata: Heart centre; the energetic centre of the body
Meditation on the fourth chakra enhances compassion
Vishuddha: Communication Centre at the throat
Meditation on the fifth chakra increases creativity; communication skills are enhanced
Ajna: Seat of Wisdom at the point between the eyebrows
Meditation on the brow chakra heightens your intellectual and intuitive capacities
Sahasrara: the thousand-petal lotus at the crown of the head
Meditation on the crown chakra brings enlightenment
Complete the meditation with a simple visualisation exercise to ensure that you don’t leave yourself vulnerable and too-open to negative influences. Begin by bringing your attention to the base of your body. As you visualise the flower of the root chakra, see it closing its petals as flowers do in the evening. Repeat this visualization with each chakra in turn.
Swami Saradananda will be presenting a ‘Chakra Meditation’ workshop at Unity Studio on Sat, 6 Oct, 2-5pm. To book email: swami.saradananda@gmail.com

We use cookies on our website to give you the most relevant experience by remembering your preferences and repeat visits. By clicking “Accept All”, you consent to the use of ALL the cookies. However, you may visit "Cookie Settings" to provide a controlled consent.
Cookie SettingsAccept All
Manage consent

This website uses cookies to improve your experience while you navigate through the website. Out of these, the cookies that are categorized as necessary are stored on your browser as they are essential for the working of basic functionalities of the website. We also use third-party cookies that help us analyze and understand how you use this website. These cookies will be stored in your browser only with your consent. You also have the option to opt-out of these cookies. But opting out of some of these cookies may affect your browsing experience.
Necessary Always Enabled
Necessary cookies are absolutely essential for the website to function properly. These cookies ensure basic functionalities and security features of the website, anonymously.
Functional
Functional cookies help to perform certain functionalities like sharing the content of the website on social media platforms, collect feedbacks, and other third-party features.
Performance
Performance cookies are used to understand and analyze the key performance indexes of the website which helps in delivering a better user experience for the visitors.
Analytics
Analytical cookies are used to understand how visitors interact with the website. These cookies help provide information on metrics the number of visitors, bounce rate, traffic source, etc.
Advertisement
Advertisement cookies are used to provide visitors with relevant ads and marketing campaigns. These cookies track visitors across websites and collect information to provide customized ads.
Others
Other uncategorized cookies are those that are being analyzed and have not been classified into a category as yet.
SAVE & ACCEPT